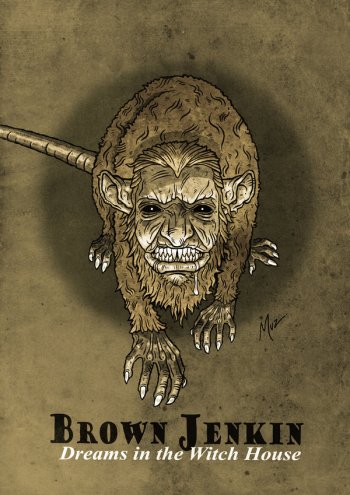 The Dreams in the Witch House is a horror story by Lovecraft, published in Weird Tales in July 1933.

There’s a specific reason I wanted to review this story after The Nameless City, and there’s some really interesting irony to it; which I will come to later.

For now, we must begin with Walter Gilman, a student in the city of Arkham; one of intense and magical topics, ranging from quantum physics to the veiled mystery of magic and folklore.

He takes up residence in a room so unpopular that even the landlord had grown wary of renting it; for none had previously remained there for long, and the tales of the old witch who once resided there still lived on.

Gilman, even at the beginning, is shown to be persistent in his pursuit of forbidden knowledge, that intrinsic theme of Lovecraft, and it’s this persistence, married to stress and fatigue, that remain with us throughout. It is what draws him to this house, and what keeps him there, studying it in ever greater and obsessive depth.

There is a believable desire on part of Gilman to pry apart the mystery as the tale winds on, and this transferred also across to me as well. An interesting theme, which may not be so evident at first, is the power of thought; with reality and mentality revealing a partnership often forgotten, and merging the realms of consciousness.

Of the other characters present, I found their roles to be balanced and placed well. In some way, they could be seen as portrayals of the various elements of Gilman as a person; rationality, fear, curiosity and so on.

Gilman, despite these external factors, continually seeks to understand the nature of, and what – if at all – was bestowed upon the dark and fabled occupant of years long gone. There are details to the old tales that he cannot ignore, and their strangeness quickly becomes tangible.

It is in this aspect that the book polarised me, though.

On one hand, Lovecraft creates scenarios and moments of worryingly conceivable possibility; I felt that I myself could make real the links between them, and felt strangely familiar with it all.

I enjoyed their relatable impact upon Gilman, and found that their teetering into ever increasingly surreal moments was paced well.

Yet, at the same time, I often felt that much of this was predictable; almost to the point that I didn’t need to read the story in any great detail. My own understanding of the topics involved could already paint an outcome, though I admit I was caught out a little by the final event at the heart the story.

I really don’t want to spoil this story, so will wrap things up here, but will now explain the irony I mentioned at the beginning.

As I contemplated the words and rolled through the scenes they painted, I too felt as if I could momentarily slip into a peculiar place; as if a hidden truth was not so hard to find between the lines.

With surprising ease could I call upon these feelings, and found that they too were later accompanied with dreams of a stranger nature, as if residing in the fabric and nature of our world at night.

It is due this influence directly upon me, that despite its predictability, I rate this story higher than I would otherwise.

Maybe, then, should you delve into this tale, you too will glimpse upon that which we should, or should not, hope is merely fiction.

Author of Gothic Fiction/Fantasy series, Dawn of Eternity. View all posts by Astandane

This site uses Akismet to reduce spam. Learn how your comment data is processed.