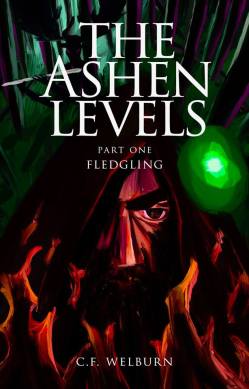 Fledgling is the first book of five in The Ashen Levels, and tells the story of Balagir, a man who has woken amidst a strange world and even stranger company.

Bereft of any useful memories, he finds himself thrown down a path etched out by cunning and dangerous tasks.

Discovering that he is an ‘Ashen’ only adds to the pile of mysteries he must sort through, and it is through this toil that the story reveals itself.

In Fledgling, the plot for me started out small and gradually grew in intensity as the story unfolded, something I enjoyed and thought worked well.

The presentation of details useful for the reader followed this pace too, and I think was done in a way that fit the overall theme of the book; I could definitely grasp the reality of Balagir having to deal with what he was given, which initially is very little.

There is definitely strong inspiration from fantasy and role playing genres/games, but this is used with originality and balance, giving us a believable trail of events with the right amount of imagination.

The use of deception and trickery was also masterfully done, and added an element unique to itself.

The denizens who feature in this world are well written and relatable: everyone felt as if they belonged in the place they held. The way they were established in the book greatly eased the world building too.

I found that the balance between characters was also very good, and Balagir’s own development was natural and believable. His adaption to the world around him was clear and logical, and as a reader I was able to feel connected to him.

What I feel was missing in parts, however, was more depth in the description of some characters overall. This is not a major issue as it wasn’t something which got in the way of the story, but it would have been nice to have more padding to the world in this regard.

The more I read into Fledgling, the more I could see the things which also inspire myself, and understand where those elements have come from. Don’t get me wrong, this is a good thing, as it is done well and with creativity.

The pacing helps this a lot, as information is given more or less ‘as needed’, which works because we have a character who is also experiencing this. Personally, I believe that a reading experience isn’t just about having your hand held by the author.

Welburn creates a world that fits perfectly well within its scope, and all of the elements within feel natural because of this. As something new is revealed, it does not feel out of place. In fact, it feels somewhat familiar, and no doubt because of the authors inspiration.

Personally, I hope that more world building is done further along the series.

Overall this was a book I greatly enjoyed, not just in story, but also in the way it is written.

The style feels complex enough with bowing out to over simplification, something which I feel deflates fiction.

There is a good scope of words that imply meaning without needing additional sentence length.

Minus a few occasions where some wording felt a little odd for me, there was nothing which stood out as bad, and felt like a solid piece that had time poured into it.

Welburn manages to take intrinsically opposing elements, like black and white, good and evil, and somehow create colour with them.

The way actions impacted others and plot-lines fell into place was effortless; everything played out just right, with nothing seeming like a ‘get out of jail free card’.

One of the strongest aspects of Fledgling is its ability to take deception and trickery, and turn it into something that felt balanced and justified. A negative moment felt universally accounted for, but until we received the outcome, it created a tangible atmosphere.

I’ve said it before and I will say it again: I am a slow reader. I am also very good at starting things, but finishing? I think it is the Aries in me.

Despite this, with Fledgling I found myself able to fight back against these tendencies of mine, and this was a book I really wanted to finish – not because I was suffering, but because I was enjoying.

So in conclusion, this definitely worth picking up if you enjoy the fantasy genre in any way. I received it for free through a promotion, but would not bat an eyelid if I paid full price in a store for a physical copy.

Do yourself a favour.

Author of Gothic Fiction/Fantasy series, Dawn of Eternity. View all posts by Astandane

This site uses Akismet to reduce spam. Learn how your comment data is processed.